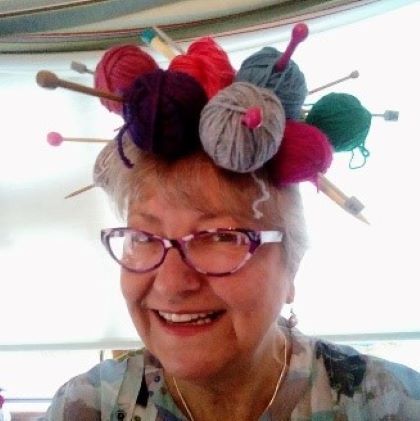 My name is Jan, and I’m the Senior Knitter at WowKnitsByJan …..actually, I’m the only Knitter at WowKnitsByJan! There’s a team of three of us – me, my husband who is the unpaid Post Boy (who usually has to fork out for the cost of the postage because I never seem to have any cash!) and our StaffyJack dog, Rusty Og who just seems happy to do anything as long as he’s rewarded with a game of ball!

WowKnitsByJan is the name of my Etsy shop which I opened in 2017, just as an experiment. I’m an avid knitter and had a boxful of knits with nowhere to go – they sold and we were off!

I’ve knitted since I was a young child and I have vague memories of my late Mum teaching me the basics. I used to copy whatever my 2 sisters were knitting, but I usually had to rip out (unpick, frog) an old jumper before I could start – and unlike my sisters, I could never be bothered to wind the yarn into skeins and wash it, so I wound it straight into balls and knitted furiously – despite the kinks! The results were very “textured”! (I must admit that I still do this sometimes – because the kinky yarn is ideal for dolls hair!). My greatest knit (in my opinion!) as a teenager, was a sky blue polo-neck jumper, with white fluffy clouds – I designed this myself and I was so proud that I wore it on a hot summers day despite sweltering under all the fluff!

I spent most of my working life working as a Mental Health Nurse in various parts of the UK, where I met my Irish husband. I knitted in my spare time – sometimes for myself, sometimes for friends and family – but it got quite serious when my Mum and I discovered the toy patterns by Jean Greenhowe! Mum was always knitting one of Jean’s designs and often wrote to her. Together we knitted a Royal Bear for Prince Williams first baby – I knitted the Bear and Mum knitted some mini toys! When I later discovered Alan Dart’s patterns I was very excited and I eagerly looked forward to his latest designs each month which were published in Simply Knitting magazine. Both of these fabulous toy designers have influenced me in my toy/doll knitting.

For some reason that I can’t remember I became a little obsessed with knitted tea cosies – so obsessed that I persuaded The Post Boy to drive us to Wimbledon (from Hampshire) to pick up a dresser that I had bought on ebay, just so that I could display my cosied tea pots! I began to design Cosies, and specifically personalised Cosies that I would knit for gifts – I had my one and only Cosy pattern published – the Get Well Soon - in Tea Cozies 4, and the only gratuity I received was my name printed at the back of the book! 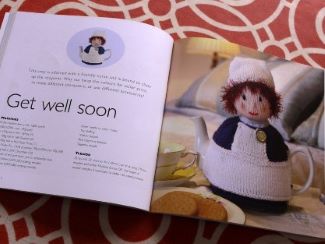 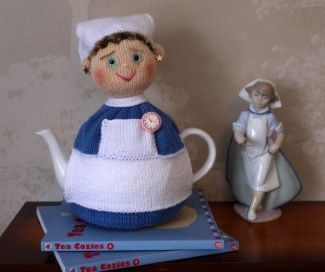 I have tried writing patterns since then but without any success – sheets of scrap paper always end up in the bin! I have decided that it’s a 2-man job and that someone should write the instructions as I knit, but The Post Boy isn’t up for this at all despite it being some sort of promotion for him!

And so I retired from nursing in 2012, and we moved over the Irish Sea to The Post Boy’s homeland and installed ourselves in the back-of-beyond in County Cavan. I found myself with more time on my hands for knitting now and just knitting for the local Agri show competitions wasn’t enough to keep me busy – so my small cottage industry emerged. I started by knitting for local people – new baby gifts, and more unusually, Mini Dogs as remembrance gifts for those whose dogs had passed away – but I then decided to get a bit more professional and my Etsy shop evolved. 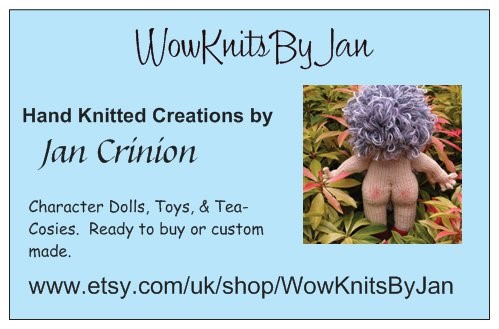 WowKnitsByJan specialises in hand-knitted Tea Cosies and Dolls, but I will knit anything on request – although I draw the line on clothing! I don’t really relish being asked to knit hats either as I seem to have difficulty with the sizing! My knits are usually my own design and I started off with the obligatory Michael Tea Higgins Cosy which seems to be a great seller towards Christmas, but I have expanded my range since the early days and am always trying to think up new designs and twists. 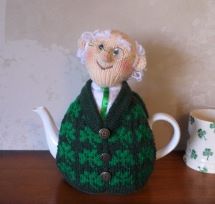 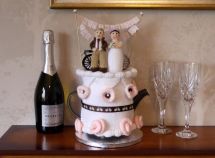 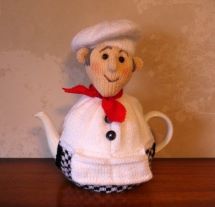 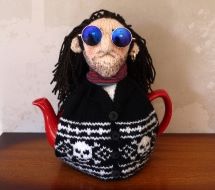 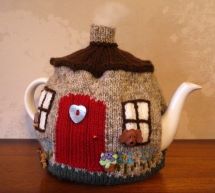 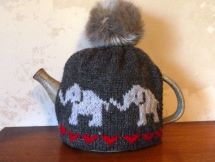 I really enjoy the “art” of stranded work / fairisle and love to see what is emerging as I knit. I plan the design on graph paper and just knit! This works very well on special Cosies for birthdays or weddings as I can knit a message, or just the date … 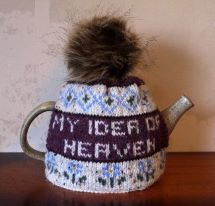 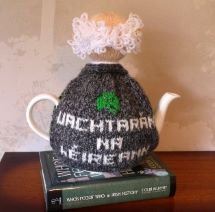 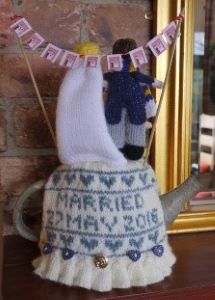 I also knit Mini Me dolls and I knit from photographs that customers send to me. Obviously the quirkier the person is, the more I can add to the knit. I have customers who ask me to knit celebrities that I’ve never heard of, but this has also had the happy advantage of me getting into TV series like Killing Eve and Peaky Blinders! 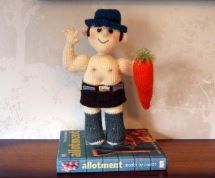 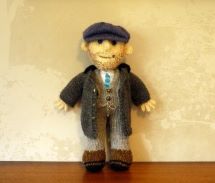 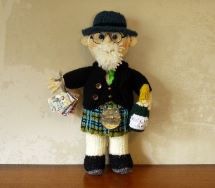 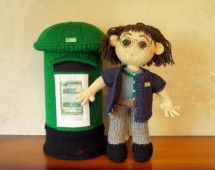 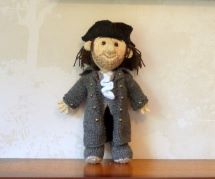 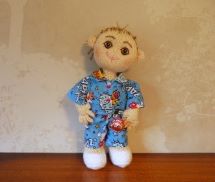 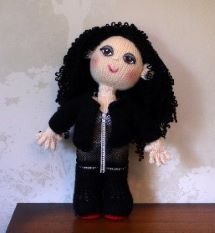 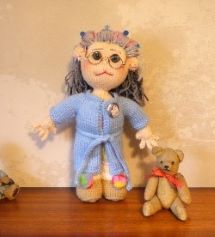 I knit mostly in double knitting yarn and on 3mm needles, but the yarn I use is often dependant on the colour as I like to match the colour of my knits as closely as possible to the real thing! Stylecraft Special DK is ideal for this as come in so many shades and I've recently discovered Must Have Minis which are a handy way to get a burst of colour without having to invest in a full size ball. I don’t work from patterns and have everything stored in my head, which is sometimes dangerous if I’m experimenting with something new as I have a habit of making notes on the back of an envelope which then gets thrown away accidentally! My knits have developed over the years as I have learnt different techniques and tricks, and I trawl the internet for ideas and new methods. In the past year I have started to use bendy hair rollers inside of my dolls so that the neck can easily support the head and can be positioned at a tilt. 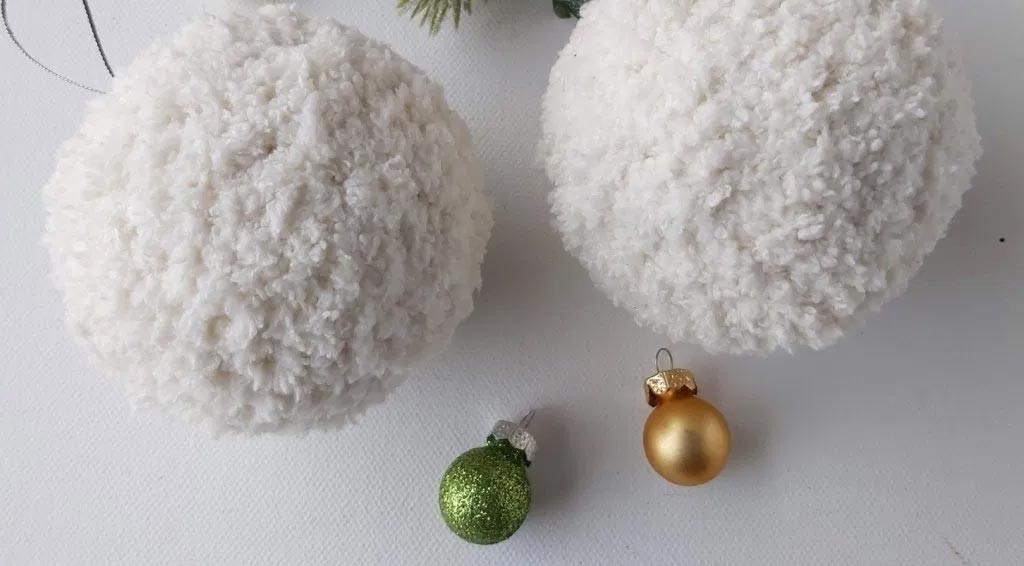 I have recently been working on a secret project for a British TV show which airs in November – I was asked to knit a Mini-Me doll of the presenter, so that’s all very exciting even though I’ve been sworn to secrecy! I have also just finished making 10 Cosies for a 1940’s style Cocktail Bar in London – that was a very hard slog and I ended up dreaming about them! But that’s not unusual – I often dream of knitting, and I am usually planning my next project whilst I still have something on the needles!